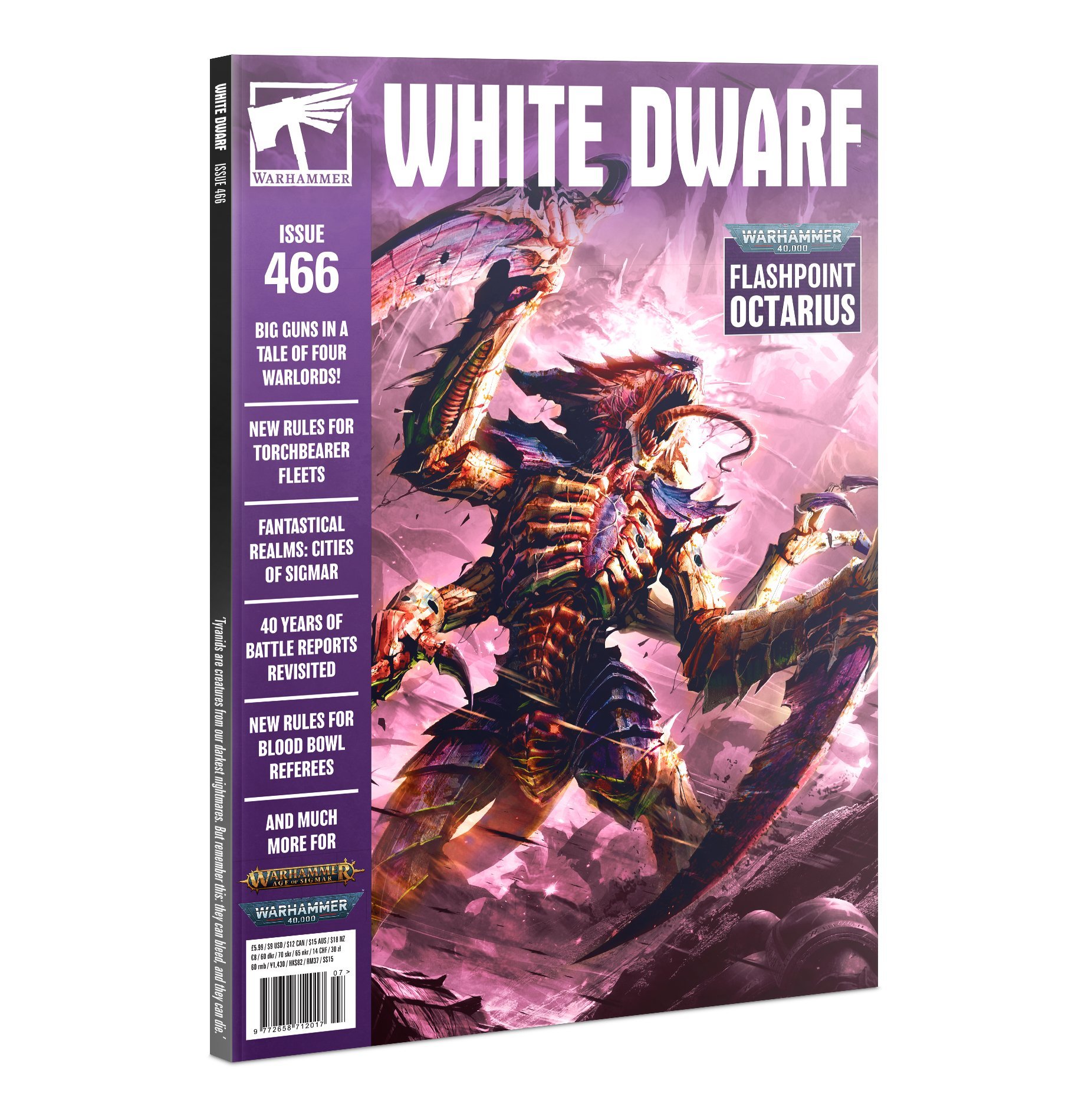 Here’s what you can look forward to in July’s issue:

Worlds of Warhammer
Phil takes a long, storied, and celebrated look back at the legendary career of the mighty Jervis Johnson.

An Eternity of Wargames
Ever tried to write a complete history of the games Jervis has worked on over the years? Well, we did. It took ages.

The J Files
Rules of Engagement has been taken over! Jervis returns for his very last J Files (sob, cry, and sniffle).

Temporal Distort
Jervis joins us once more for a journey through space and time to revisit some of his favourite White Dwarf Battle Reports from over the last 40 years.

A Tale of Four Warlords
The warlords smash the 75 Power barrier with their latest Crusade creations.

A Light in the Darkness
A look into the clandestine operations of the Indomitus Crusade’s Torchbearer fleets.

The Hunt for Mhorwen
The Adeptus Mechanicus and Custodes team up to hunt down a missing Space Marine Chapter in this short story.

Echoes From the Warp
Having trouble picking your secondary objectives? Not sure if you should just kill stuff instead? This article by Robin Cruddace may help you decide…

- The Dark Krakens
An Ultima Founding Chapter and Successor of the Salamanders the Dark Krakens have a particular set of skills... Fancy fighting an underwater battle? Now you can!
Includes two Narrative Datasheets for two Dark Kraken Characters, Theatre of War rules for fighting battles beneath the Mirror Sea, and a brand new Mission.

Fantastical Realms: Cities of Sigmar
Pack your bags, kids, we’re heading for the big city! Modellers and painters prepare yourselves for a treat – colour schemes and conversions abound for the loyal followers from Sigmar's cities.

Into the Cities of Sigmar
Two exceptional displays featuring the armies of the free cities. If you love clever conversions, you’ll love this article.

Building Your Party
Wizards, warriors, ranged combatants. Which four characters will you choose for your adventures in the Cursed City?

Vital Cargo
Who needs big guns and huge engines when you can have an Arvus Lighter? Two new missions for using these much beloved and nippy transports.

Red Cards & Rulekeepers
Seems like the Refs are taking a more active part in Blood Bowl these days. They’ve even got their own rules. Meddling gits!

The Heir of Isildur™
Aragorn is one of the mightiest warriors in Middle-earth. Here’s some tactical advice on how to get the most out of him.

I, Behemat
The smallest of the small and the largest of the large wreak havoc and carnage across the lands of Ghur in this short story from Black Library's Eric Gregory.

- Rules for two named referees in Blood Bowl, Elnos Lawkeeper and Redkur Forgebeard.
- Predators of the Deep Theatres of War table for fighting games in Bianzeer's Hollow from Flashpoint: Octarius.