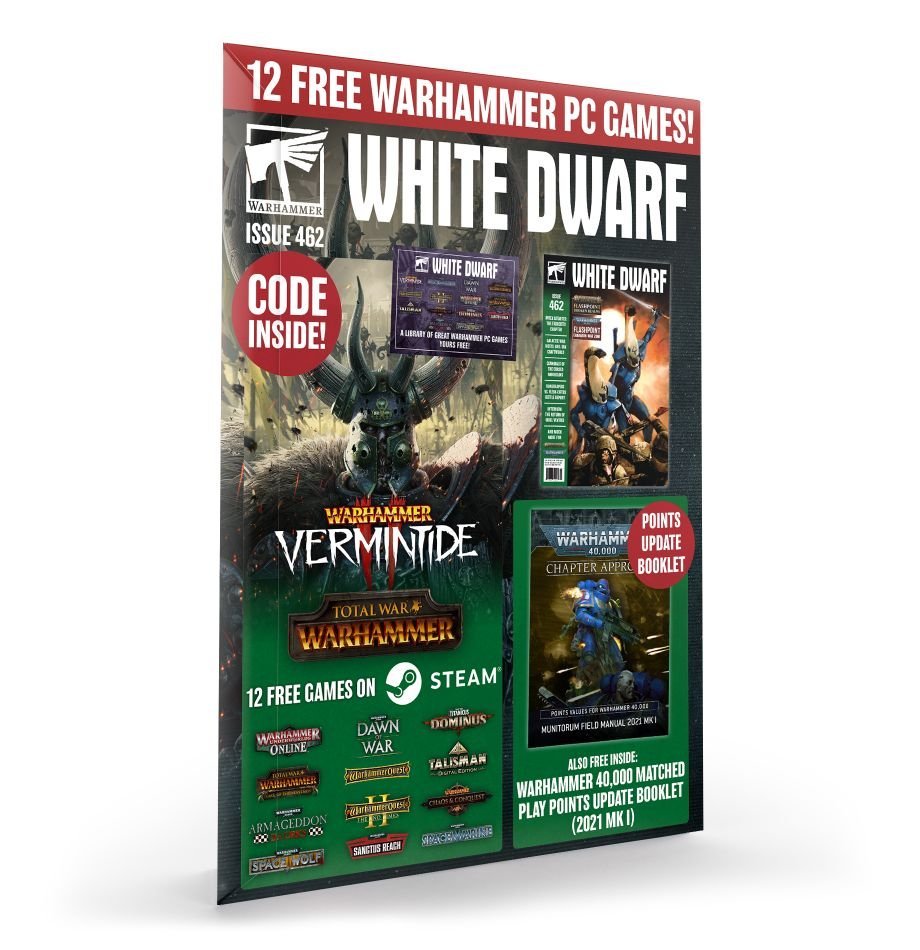 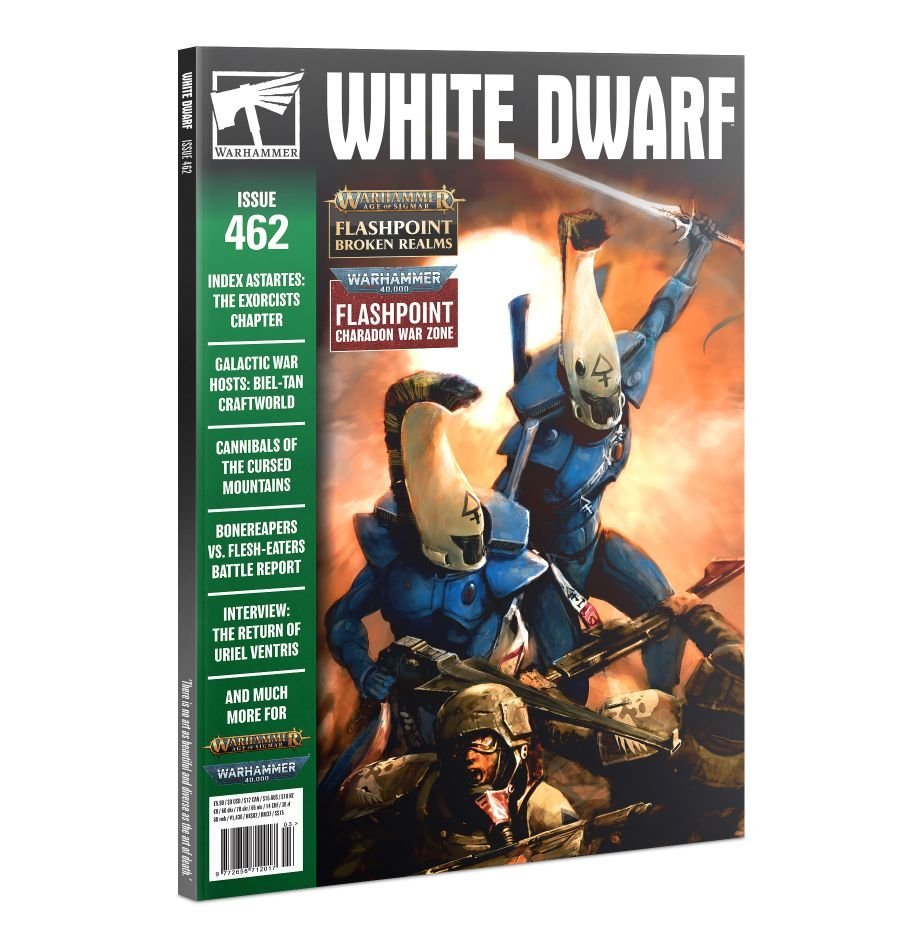 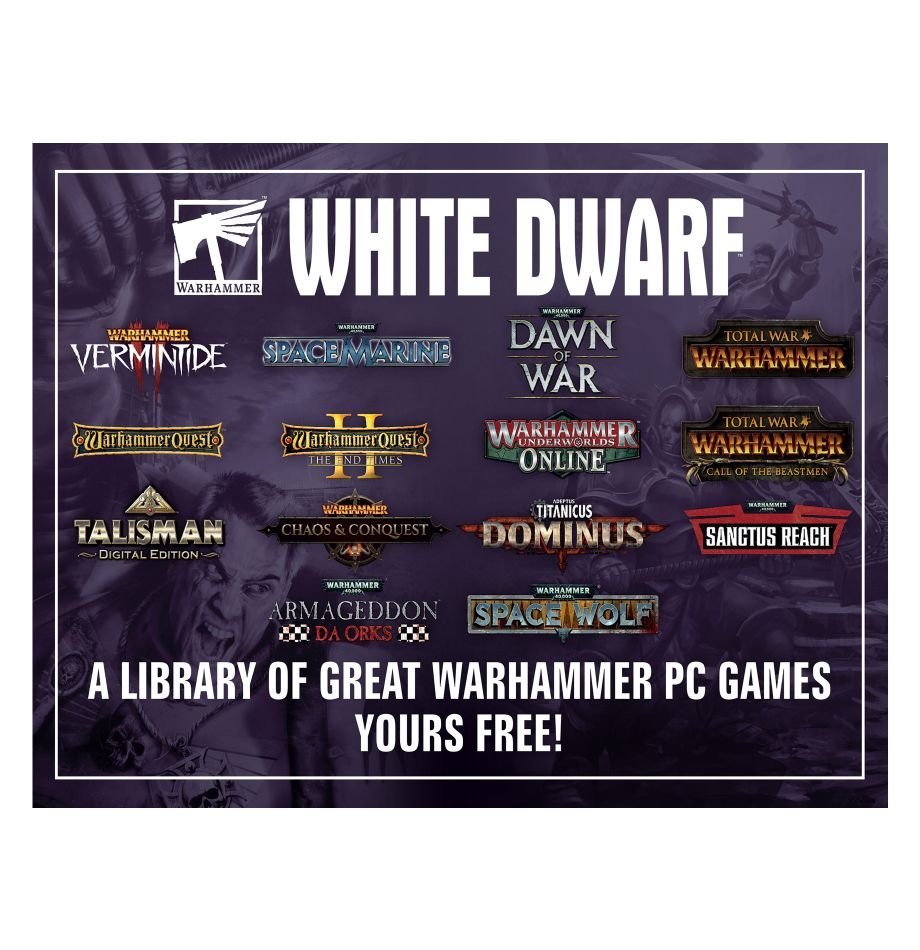 Here’s what you can look forward to in March’s issue:

Contact!
Letters, painting advice and beautifully painted miniatures. Plus, a spider-tank and a load of Necrons!

Worlds of Warhammer
Phil delves into the evolution of Warhammer 40,000 with a case study on his favourite army: the Space Wolves.

Warhammer 40,000 Flashpoint: Charadon
Behind the Charadon Line
Already reeling from Typhus’ attack, the systems of the Charadon Sector are further mauled by Chaos forces.

Terrors of the Sands
A short story in which Word Bearers bikers hunt for worthy prey amid the desert dunes.

Index Astartes: Exorcists
We delve into the dubious practices of one of the Imperium’s most mysterious and controversial Space Marine Chapters.

The Daemons Within
A gallery of Exorcists painted by studio members and real-world hobbyists!

Paint Splatter: The Exorcists
You've read the background and the new rules – here’s how to paint an army of Exorcists in all their crimson glory, to both Parade and Battle Ready in both Contrast and Classic Methods.

Echoes from the Warp
Board up your windows and barricade your doors – Robin Cruddace is here to talk about terrain rules.

Warhammer Age of Sigmar Flashpoint: Broken Realms
The Cannibals of the Cursed Mountain
Don't you just hate it when a horde of deranged ghouls interrupts your battle? These new rules include 2 unique battleplans and show you how to add a third faction to a two-player game!

Lost in Shadows
Things take an unpleasant turn for Lord-Veritant Keiser Ven Brecht in this short story when he finds himself hunted in the Realm of Shadows.

Battle Report: War of Flesh and Bone
The Ossiarch Bonereapers take on the Flesh-eater Courts in three linked battles amidst the Vertiginous Peaks of Ymetrica.

Rule of Engagement
Jervis joins us to talk about solo play games and how you can play an entire Warhammer battle against yourself.

Path to Victory
Dave Sanders delves into the tactics of two new warbands – the Starblood Stalkers and Khagra’s Ravagers.

Slayer of Gods
Two exclusive missions for you to pitch your Warmaster Titans against each other. Things will get messy!

Chronicles of the Wanderer: The Maker’s Mark
Master Engineer Rikkorn Mikazrin travels to Hysh to display his greatest works, yet the Maker moves in mysterious ways…

Sleeved Issue
Each physical copy of Issue 462 is sleeved, and comes included with the following items.

- 1x Steam Voucher – this includes a code (valid until August 31st, 2021) which will unlock 12 Warhammer games for free:

- 1x 56-page printed booklet – Warhammer 40,000 Chapter Approved, Munitorum Field Manual 2021 MKI, which updates all the points values for every unit of every faction for use in Warhammer 40,000, including Forge World units