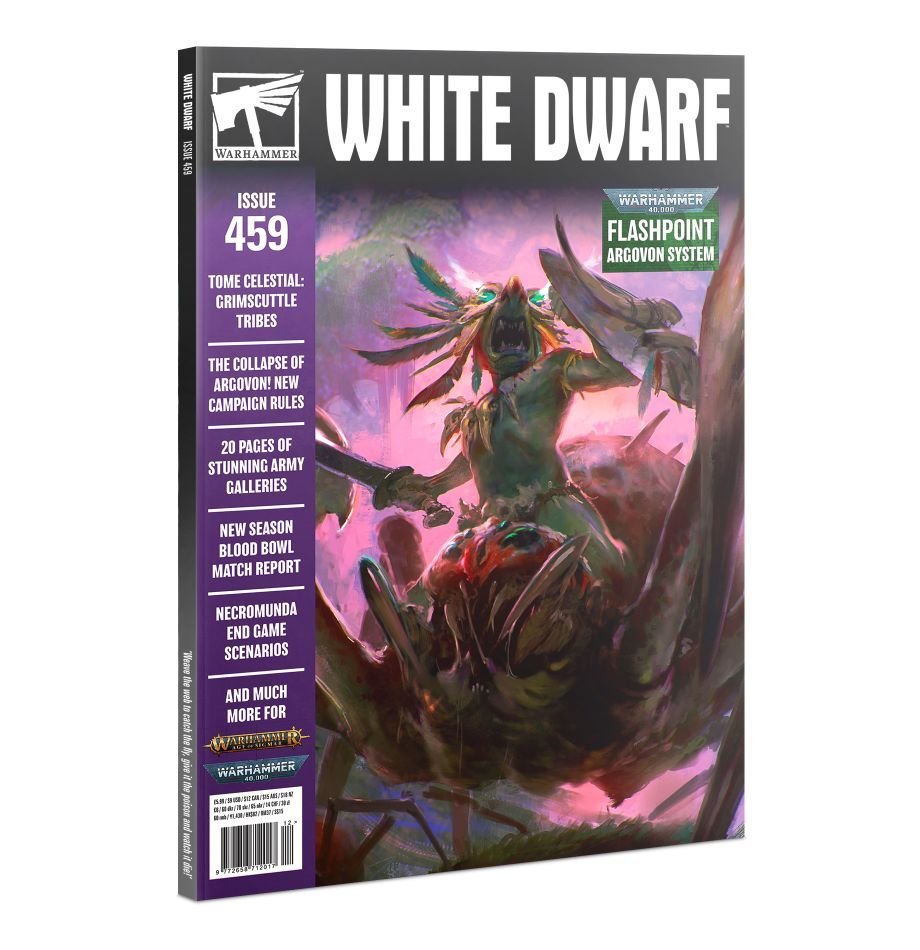 Here’s what you can look forward to in December’s issue:

Worlds of Warhammer
Lord-Historian Phil Kelly (on Gryph-charger) explores the history of the Mortal Realms. This time: Chaos!

Outside the Studio
We talk about the models we've painted and the games we've played while working from home over the summer.

Crusade Challenge
Are you ready for a Warhammer 40,000 Crusade campaign? Well these seven hobbyists certainly are!

Echoes From The Warp
Robin Cruddace joins us to talk about nine of the little changes to Warhammer 40,000 and why they have a big impact.

Faith & Fire Part IX
Miriya and Verity finally run their foe to ground. But will they be in time in the final part of James Swallow’s epic novel?

Argovon Campaign: Argolish in Flames
In the fourth part of this background series, the cardinal world of Argolish has its faith sorely tested.

The Cost of Survival
The Emperor protects. Or does he? Find out in this short story set during the war on Argolish.

Argovon Campaign: Collapse of Argovon
In the final part of the Argovon Flashpoint background series, the capital world comes under attack.

War for Argovon
From the towering spires of the Argovonya to the planet’s dense forests, Argovon is under attack in these two short stories.

Paint Splatter: Spiderfang Grots
Classic style or Contrast? How will you paint your spiderlings?

Rules of Engagement
Louis Aguilar joins us to talk about player feedback and how FAQs are incorporated into the game.

The Colours of Magic
Feast your eyes on one of the most colourful armies around – a Disciples of Tzeentch force painted by Steve Wren.

Glory Points
Dave joins us to chat about some of his favourite fighters from Beastgrave.

Match Report: The Bögenhafen Bash
Join Bob Bifford and Jim Johnson for the first match of the new season as the Bögenhafen Barons take on the Thunder Valley Greenskins.

Aerial Anomalies
Looted Imperial fighters? Imperials fighting for the Greater Good? There must be something in the air!

Going Out With a Bang
So you think you've got the most powerful gang around, do you? Want to prove it? Includes 3 End Game scenarios for your to put your gang through its paces.

Shadow & Flame
A tactics guide for using the Balrog of Morgoth. As if you really needed help!

The Artist Unleashed
Golden Demon- and Slayer Sword-winner Richard Gray joins us to talk about some of his exquisite painting competition entries.