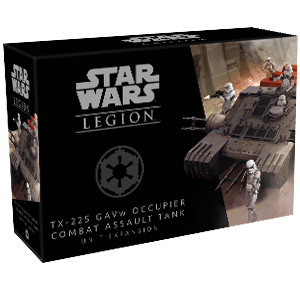 The Galactic Empire has always recognized the ability of advanced weapons to sway the masses. Much of the time, these technological terrors can prove their point without firing a single shot; the sight of an AT-ST striding across a battlefield or the Death Star looming in the sky is often all it takes to bring local populations in line. It should be no surprise, then, that the same research programs that spawned these menacing weapons also produced the TX-225 GAVw Occupier Combat Assault Tank.

Low and menacing as it lurches forward, one of these tanks creates an imposing presence while it patrols the streets of Imperial-occupied worlds. Able to operate in the tight confines of cities or on open battlefields, the Occupier Combat Assault Tank can frighten those who oppose the Empire into submission with its weapons and appearance alike. Soon, you can add another massive Imperial war machine to your Imperial armies with the TX-225 GAVw Occupier Combat Assault Tank Unit Expansion for Star Wars: Legion.

Within this expansion, you’ll find one unpainted TX-225 GAVw Occupier Combat Assault Tank miniature featuring a wealth of customization options. In addition to letting you choose whether a pilot peers out of the tank’s lower hatch, the tank’s hardpoint can be customized in four distinct ways. On the one hand, a gunner wielding a DLT-19 blaster rifle or an RT-97C heavy blaster rifle can lay down additional fire from the rifle pintle. On the other, the tank’s commander can direct troops from the upper hatch, or you can simply opt to have this hatch closed. Finally, this expansion also contains three crates of kyber crystals that can be loaded onto the tank or added to the battlefield for even more cover and thematic flavor.

Crush the Rebellion In its mission to conquer and hold worlds, the Empire needs vehicles that can do more than just press the attack. In this capacity, the TX-225 is one most versatile tools that Imperial commanders have at their disposal. Its low profile, heavy armor, and surprising maneuverability make it useful in a number of situations, from transporting cargo to providing Imperial troops with fire support in tight quarters.

But just because it plays many roles does not mean it’s any less powerful than other heavy Imperial weapons. Like an AT-ST or an E-Web Heavy Blaster Team, a TX-225 GAVw Occupier Combat Assault Tank features devastating firepower that poses a threat to enemy personnel and vehicles alike. Even better, if your target is within range, a tank’s Forward Twin MK 2e/w Cannons and Lateral Quad MK 2e/w Cannons can be linked together in a single attack to deliver a tremendous blow to an enemy unit.

Wielding such heavy firepower and while also operating a massive vehicle like the TX-225 takes the coordination of an entire team and handpicking an elite pilot to command your tank can make it even more potent. First Sergeant Arbmab, for example, excels at putting his Occupier Combat Assault Tank in the most advantageous position for his gunners to open fire. If you’re looking to get the most out of your attacks, however, you can do no better than an Imperial Hammers Elite Armor Pilot, who finds ways to maximize the effectiveness of the tank's weapons with every attack.

However powerful it may be, the Occupier Combat Assault Tank is nevertheless dependent on a frontal assault to make the most effective use of both its weapons and armor. To overcome this limitation, the TX-225 features a rifle pintle that gives tank commanders even more ways to plan their attacks. With a DLT-19 Rifle installed, your tank gains another way to fire on armored vehicles that approach from any direction. A RT-97C Rifle, on the other hand, increases your rate of fire, perfect for attacking enemy personnel.

Even with the addition of these weapons, the Occupier Tank is still vulnerable to being flanked by opposing forces, and Imperial commanders must resort to other means to keep their tanks moving. Fortunately, the TX-225 is usually accompanied by detachments of Stormtroopers and, when working together, these units can form a potent attack group. With Stormtroopers screening its sides, the Ground Assault Vehicle is free to play to its own strengths, focusing fire directly ahead.

In turn, the TX-225 becomes the first Star Wars: Legion vehicle able to transport troops. While boarding an open transport like the Occupier Combat Assault Tank still leaves a unit vulnerable to attack, that unit can take advantage of the vehicle's speed to get into the fight even faster. In fact, you can even deploy a trooper unit directly onto a TX-225 and have it ferry your troops into the thick of things from the very beginning of a battle! If this is the case, it's key for the GAVw to stay in contact with your army's commanders, which can be made much easier by outfitting it with an HQ Uplink.

Rumbling up the street, its laser cannons poised for attack, the TX-225 GAVw Occupier Combat Assault Tank can make even the most steadfast Rebels rethink their commitment to defying the Empire.