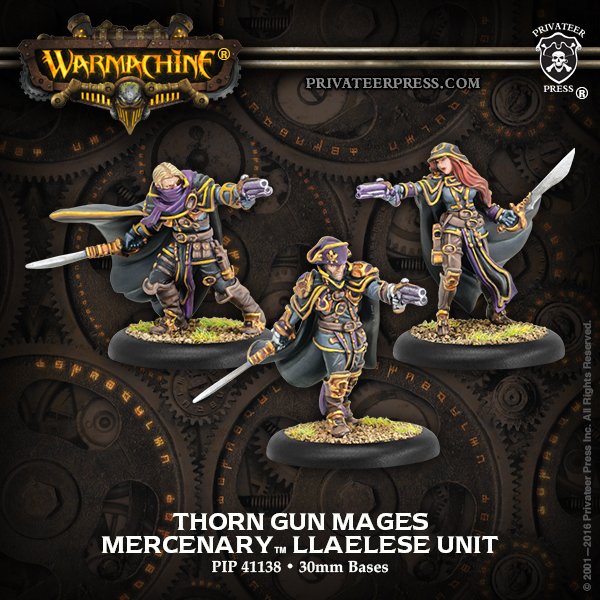 Clothed in black to honor and mourn the last king of Llael, Thorn Gun Mages are among the deadliest and most zealous soldiers of the Llaelese Resistance. Each of these veteran gun mages is a lethal arcane combatant skilled in the use of Llaelese double-barreled magelocks. Their virtuosity with their weapons is matched only by their solidarity as they fight in an increasingly desperate cause.

This is a new mercenary gun mage unit featured in WARMACHINE: Prime.

FEATURES: The Thorn Gun Mages bring versatile firepower to Mercenary, Cygnar, and Protectorate of Menoth armies. With ROF 2 on their dual magelock pistols, this three-man unit can pump out six shots per activation. Combined with the unit’s three ammo-type abilities and its Both Barrels special attack, the Thorn Gun Mages have a versatile set of tools for their commanders to employ.

TRADE POINTS: With their great flexibility, the Thorn Gun Mages are sure to be popular choices among both Mercenary and Cygnar players, as these Factions have the tools to enhance the Thorn Gun Mages’ already impressive firepower. This item is likely to see higher than normal demand, given its multiple-Faction appeal.