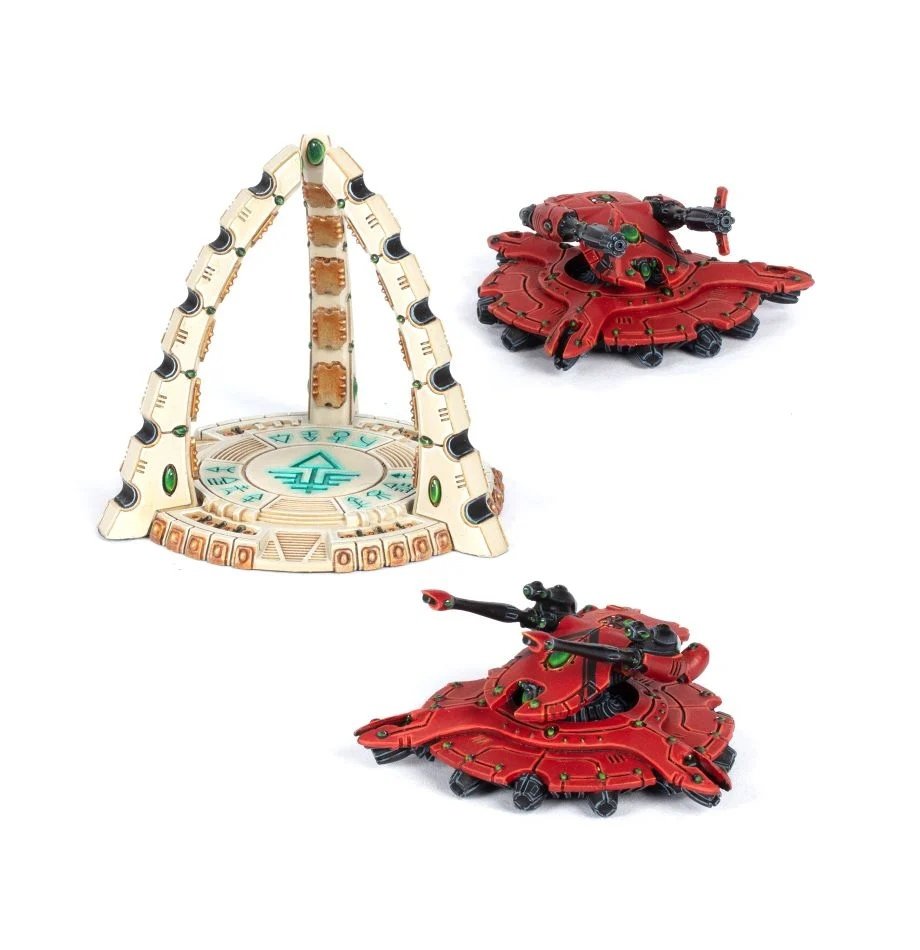 Aeldari rely on their unusual technology and high mobility to thwart and confound their foes. The ground defences they employ fit their style of warfare perfectly. Mounted atop floating anti-gravity platforms, these weapons can be manoeuvred into ideal positions before the enemy aircraft arrive, supporting the fast but fragile Asuryani air fleet when and where it's needed.

Night Spinner Platforms house a devastating weapon mounted atop a sleek anti-gravity platform. Atop this platform, you'll find a Doomweaver - a deadly device that hurls threads of monofilament fibre into the air in great clouds. The effectiveness of these clouds depends on their density. Finely spun clouds of monofilament can wreak havoc upon a foe, tearing apart engine and electrical systems alike, while dense clouds can shred enemy aircraft to pieces.

Pulsar Platforms suit the lightning-raid ethos of the Aeldari well. Where other races employ anti-aircraft weapons that fill the skies with flak, the Aeldari take careful aim and knock out individual enemy aircraft with great skill. While lacking the high rate of fire some other factions can muster, one hit with a Pulsar often equals one kill.

This finely detailed resin kit allows you to build one of each type of ground weapon, including two anti-gravity platforms on which to mount them, plus an instantly recognisable Aeldari Webway Gate. All three of these resin kits feature the sleek, organic curves the Asuryani are known for, leaving little doubt as to their provenance.

The rules and background material for the two weapon emplacements are included in the box. The full rules for using ground defences in games of Aeronautica Imperialis can be found in the Taros Air War and Rynn's World Air War campaign books.

These miniatures are supplied unpainted and require assembly - we recommend using Citadel paints.