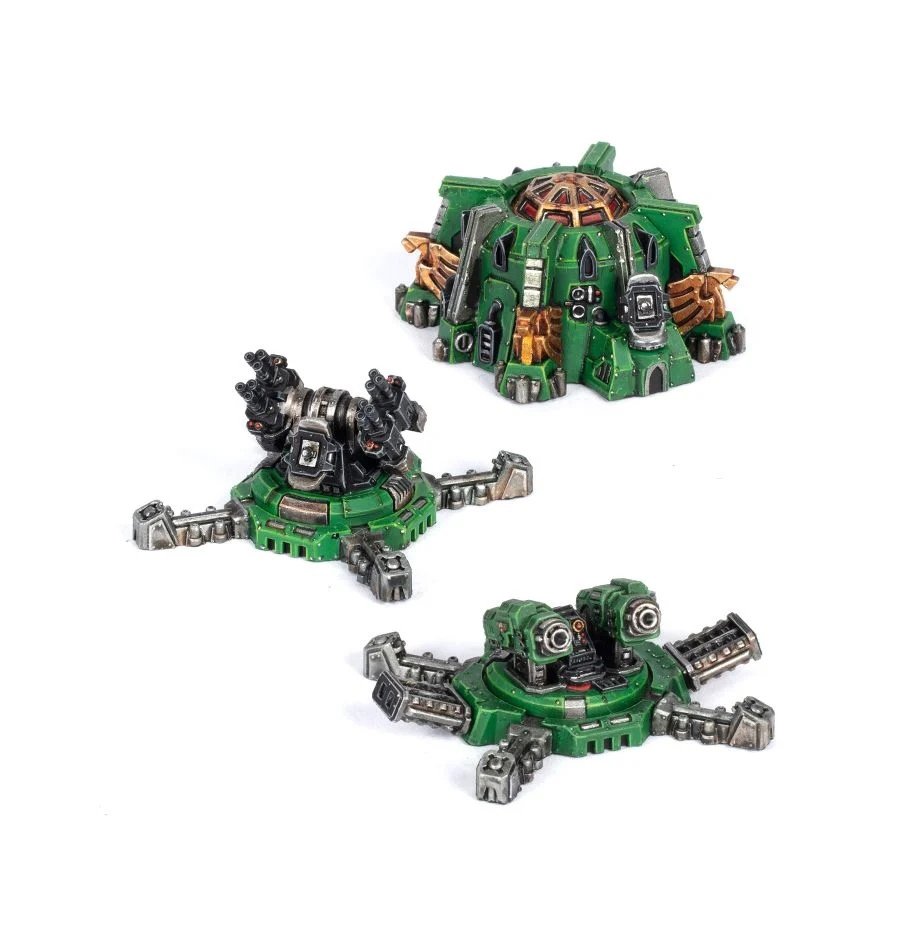 While Space Marines favour mobility and rapid redeployment, some areas must be protected at all times. The ferocious weaponry of the Adeptus Astartes can be mounted to fixed ground positions as needed, crewed by ever-ready mono-task servitors. The many enemies of the Space Marines have learned to fear the firepower of these weapon emplacements.

Skyspear Missile Launchers boast an impressive range - each of the brutal warheads is guided unerringly by the mummified remains of loyal Chapter serfs. These missiles streak across the sky, tracking their target like a hound chasing down prey.

Icarus Stormcannon Arrays combine four of these triple-barreled autocannons together to produce a frightening stream of anti-aircraft fire. Each weapon draws on an oversized drum of ammunition and is guided by its own servitor. When all four are linked together in a cogitator array, one single emplacement can stitch long lines of deadly rounds across the sky to punish all who stray too close to the holdings of the Adeptus Astartes.

This finely-detailed resin kit allows you to build one of each type of ground weapon, including two stabilised rapid-redeployment emplacements in which to house them, plus a heavily-armoured mobile bunker shrine as an objective during your games. All three of these resin kits feature the distinctive armour plating of the Adeptus Astartes, striking fear into all who would oppose the Space Marines.

The rules and background material for the two weapon emplacements are included in the box. The full rules for using ground defences in games of Aeronautica Imperialis can be found in the Taros Air War and Rynn's World Air War campaign books.

These miniatures are supplied unpainted and require assembly - we recommend using Citadel paints.