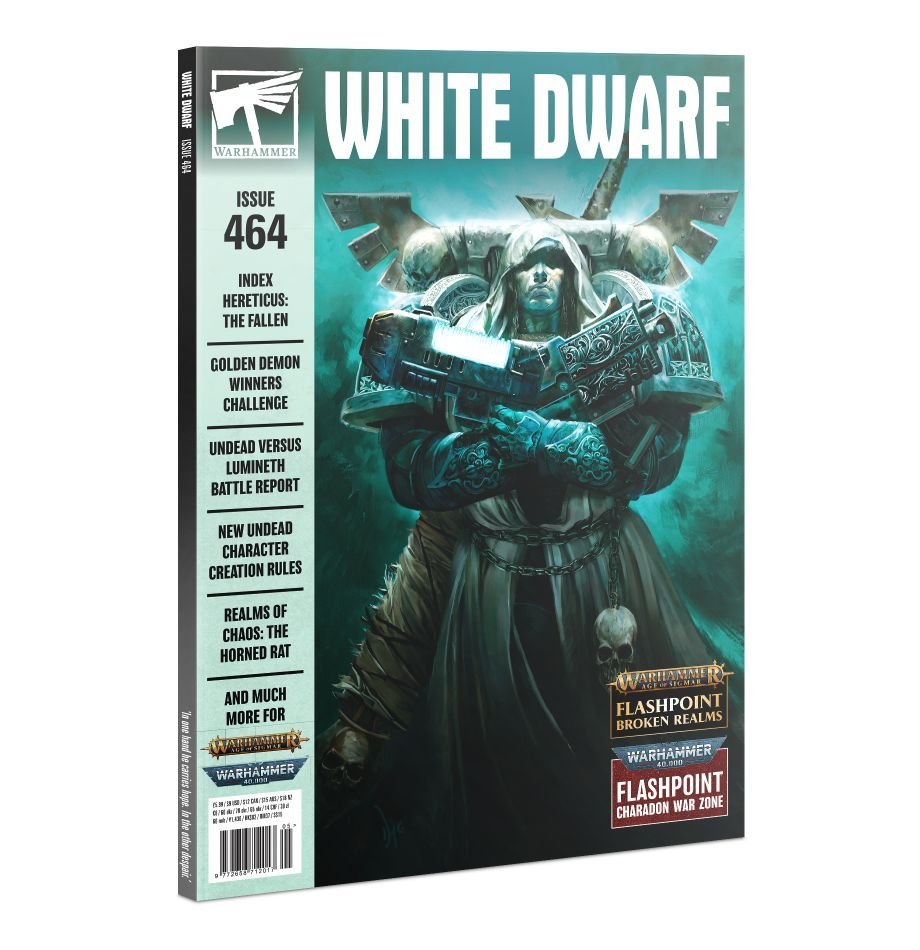 Here’s what you can look forward to in May’s issue:

Worlds of Warhammer
Join Phil as he travels back in time to take a look at the history of global campaigns. It’s Armageddon all over again!

A Tale of Four Warlords
Angry Necrons, camouflaged Space Marines, war-weary Battle Sisters, and a bunch of Nobz feature in this month’s instalment.

Index Hereticus: The Fallen
Did they betray the Dark Angels? Yes, they totally did. A new Index Hereticus for the Fallen, complete with new rules, including 3 Stratagems and 1 Relic.

Gallery of the Fallen
We show you how to convert Fallen out of existing plastic kits. Plus, a gallery of Fallen painted by studio hobbyists and an Interrogator-Chaplain to hunt them down.

Paint Splatter: The Fallen
Two stage-by-stage guides for painting the Fallen. Classic and Contrast style both work for these black-clad heretics.

Warhammer 40,000 Flashpoint: Charadon War Zone
The Metalican System
The Adeptus Mechanicus feel the wrath of Typhus’ invasion as the Host of the Destroyer Hive reaches Metalica.

The Replicator’s Canyon
Guardsmen fight heretics amidst the wreckage of a thousand tanks in this grim short story.

War Comes to Metalica
New rules for fighting over the factory worlds of the Metalica sub-sector. We hope you’ve had your tetanus jabs! Includes 3 different Theatre of War rules for Metalica, as well as 3 unique Battle Traits.

Battle Report: The Bell Tolls for Thee
The Lumineth find themselves in a battle for survival against the Undead legions of Lauka Vai, the Mother of Nightmares.

Rules of Engagement
Jervis updates a classic battleplan: the Battle for Gore Pass from the 1985 supplement Blood Bath at Orc’s Drift.

Realms of Chaos: The Horned Rat
Much-much modelling and painting advice for the ever-scheming skaven. Read-scry this useful article quick-quick.

Warhammer Age of Sigmar Flashpoint: Broken Realms
Anvil of Blood
New hero-creation charts for Wights, Necromancers, and Vampires. You can even turn a Vampire into a Fell Bat!

A Queen’s Audience
The Queen of the Vampires seeks to uncover the Dark Master’s plans in this short story.

Glory Points
In this month’s Glory Points, Dave Sanders talks about Grand Avatars and creating an all-star cast of warriors.

War on All Sides
Introducing new rules for three-player games in the depths of Middle-earth. Includes a scenario to play written by Samuel Jeffery.

Chronicles of the Wanderer: Graveyard of Legends
A wizard, an aelf, and an extremely grumpy duardin are joined on their quest by a mysterious white-bearded stranger.

Sleeved Issue
Each physical copy of Issue 464 is sleeved and comes included with a card insert that features 8 Stratagem Cards for use in games of Warhammer 40,000, all from previous issues' Index articles: