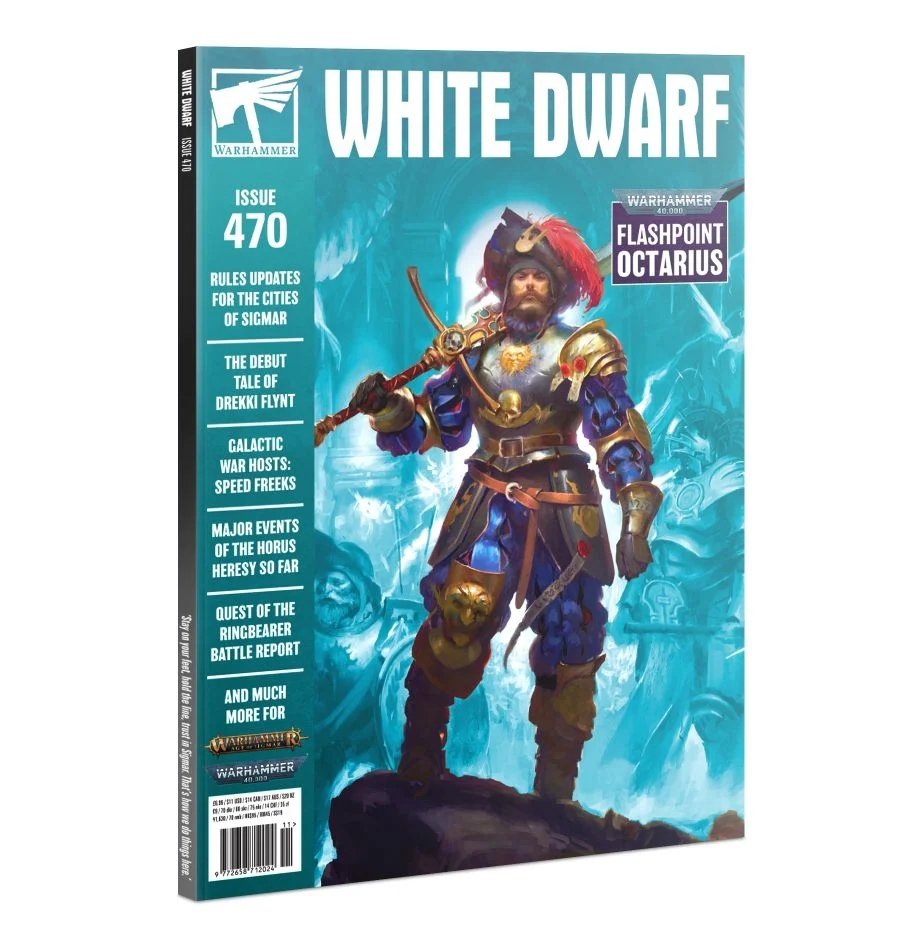 Here’s what you can look forward to in November's issue:

Contact!
Letters, painting advice, and beautifully painted miniatures. Plus: a Sylvaneth collection and a question about red hats!

Worlds of Warhammer
Part two of the FAQ on the background of the Mortal Realms. This time: realmstone, realmgates, and calendars.

Echoes from the Warp
Robin Cruddace joins us to talk about keywords and why they’re a core component of the rules.

A Tale of Four Warlords
Four mighty heroes (well, three and a very angry god-shard) join our warlords’ forces as they reach the 125 Power mark. Things are hotting up!

Warhammer 40,000 Flashpoint: Octarius
- The Red and the Dead Part I
The vital agri world of Abundantia comes under attack from Orks and Genestealer Cultists.

- The Road War
Two new Flashpoint datasheets for Evil Sunz Characters, plus a Theatre of War for fighting on Abundantia and a suite of rules for a rolling road mission: Road Wars.

- Galactic War Hosts: Waaagh! Speed Freeks!
Brrrm brrrm, dakka dakka! Join us for eight pages of painting and modelling advice for the Ork Kult of Speed. Plus, a conversion guide for a Looted Wagon!

Rules of Engagement
Louis Aguilar talks about the exciting new direction the rules team have taken with upcoming battletomes.

- The Devouring Fogs
A campaign for the Cities of Sigmar set in the ever-shifting and terrifyingly dangerous Realm of Shadow, including a Battleplan.

Glory Points
We’re on the edge… of glory! Join us in Direchasm for a whole new way to play Warhammer Underworlds: Fatal Edge!

Titanica Infernus
A look at the new rules for Corrupted Titans and how to get the most out of them. Tails are a popular upgrade choice.

Battle Report: Quest of the Ringbearer
The Fellowship of the Ring battle across Weathertop, through Balin’s Tomb and over Amon Hen in this three-game Battle Report.

Battlefields of Middle-earth™
See how the incredible terrain used in the Amon Hen Battle Report was constructed and painted.

A Game of Diamond
Black Library author Guy Haley brings us the first adventure of Drekki Flynt, soon to be a household name!

SLEEVED ISSUE
Each physical copy of Issue 470 comes sleeved and includes the following: