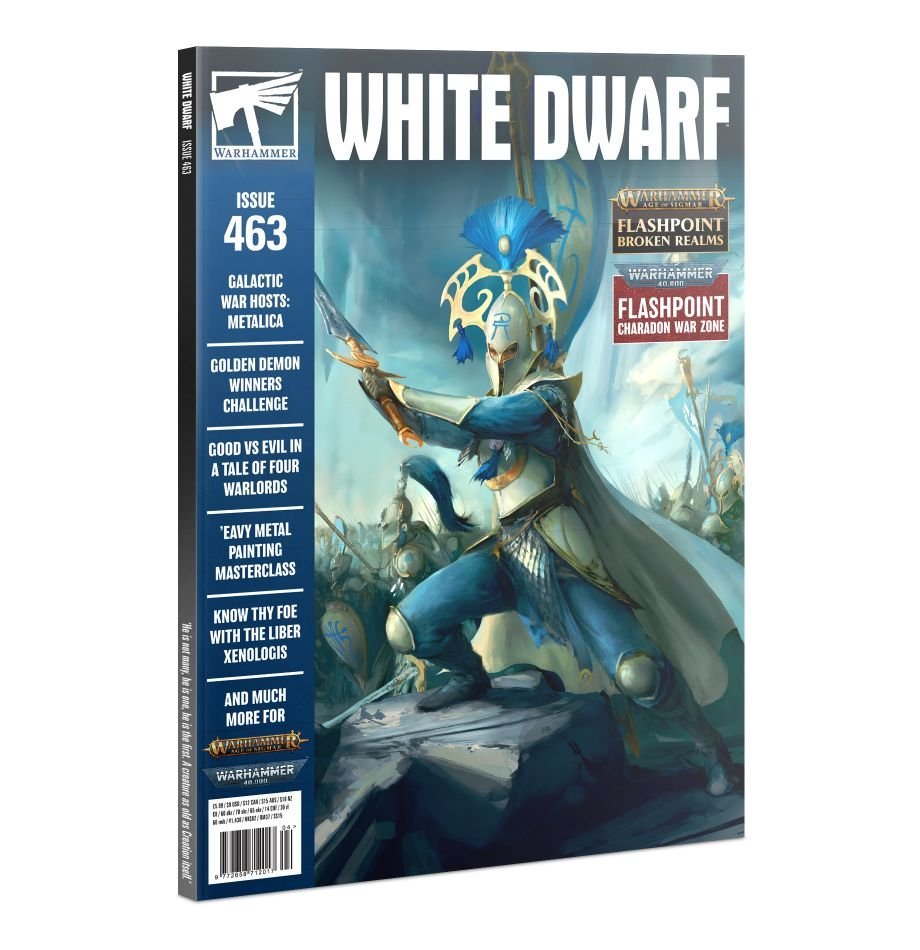 Here’s what you can look forward to in April’s issue:

Worlds of Warhammer
Arch-typer Phil Kelly talks about archetypes and how they influence the creation of named characters.

Echoes from the Warp
Members of the Warhammer 40,000 team join us to talk about Hobby Bingo.

Golden Demon Winners Challenge: Faith Under Fire
We set a bunch of talented painters from around the world a painting challenge featuring the Adepta Sororitas. This is Faith under Fire!

Warhammer 40,000 Flashpoint: Charadon
Galactic War Hosts: Forge World Metalica
Painting and modelling inspiration for the most metallic of all the forge worlds.

The Tri-Forge Cluster
The industrial worlds of the Charadon Sector come under attack by heretics.

The Great Drowning
In this short story, as the Death Guard lay siege to Septios, the water levels begin to rise...

The Death of Industry
New rules for fighting across the many varied battlegrounds of the Charadon Sector. Includes 3 new Theatre of War rules for battlefields from across the Tri-Forge Cluster and 3 new Crusade Relics for use in your Crusade games.

A Tale of Four Warlords
It’s a classic tale of good versus evil in the second part of our warlords series for the Age of Sigmar.

Warhammer Age of Sigmar Flashpoint: Broken Realms
Tome Celestial: The Battle for Tepok’s Eye
Join us in the Realm of Metal, where the forces of Order and Chaos battle over an ancient artefact.

War for Tepok’s Eye
Four linked battleplans enable you to fight the epic battles that raged around Tepok’s Eye.

Anvil of Chaos
Create your own daemonic overlords using the character building tools of the Anvil of Chaos! Includes examples that create two mighty Greater Daemons – Kazarkos and F'Tanax.

Glory Points
Dave Sanders discusses the best ways of getting into Warhammer Underworlds, including discussions on the new Starter Set, the Direchasm Core Set, and the Vanguard format.

Path to Victory
We take a closer look at the warbands in the new Underworlds Starter Set: Drepur’s Wraithcreepers and the Storm of Celestus.

War of the God-machines
Jason Lee and Owen Patten show off their mighty Adeptus Titanicus forces from the Legios Infernus and Praesagius.

Hangers-on Scenarios
Fancy some target practice on an Ammo-jack’s gun range? Well, who wouldn’t?
Includes three new scenarios based around various hired guns a gang might have in their service. This time around, these scenarios focus on Rogue Docs, Dome Runners, and Ammo-jacks!

Chronicles of the Wanderer: Protect with Honour
A Kharadron sky-fleet comes under attack, but their fortunes are spared by the intervention of an unknown warrior.

CARDBOARD INSERT
Fans of a certain vintage will remember White Dwarf of yesteryear occasionally containing cardboard inserts... Well, they're back! The cardboard insert in this issue contains warscrolls for the Greater Daemons Kazarkos and F'Tanax, as created using the Anvil of Chaos rules in this issue, for use in your games of Warhammer Age of Sigmar.