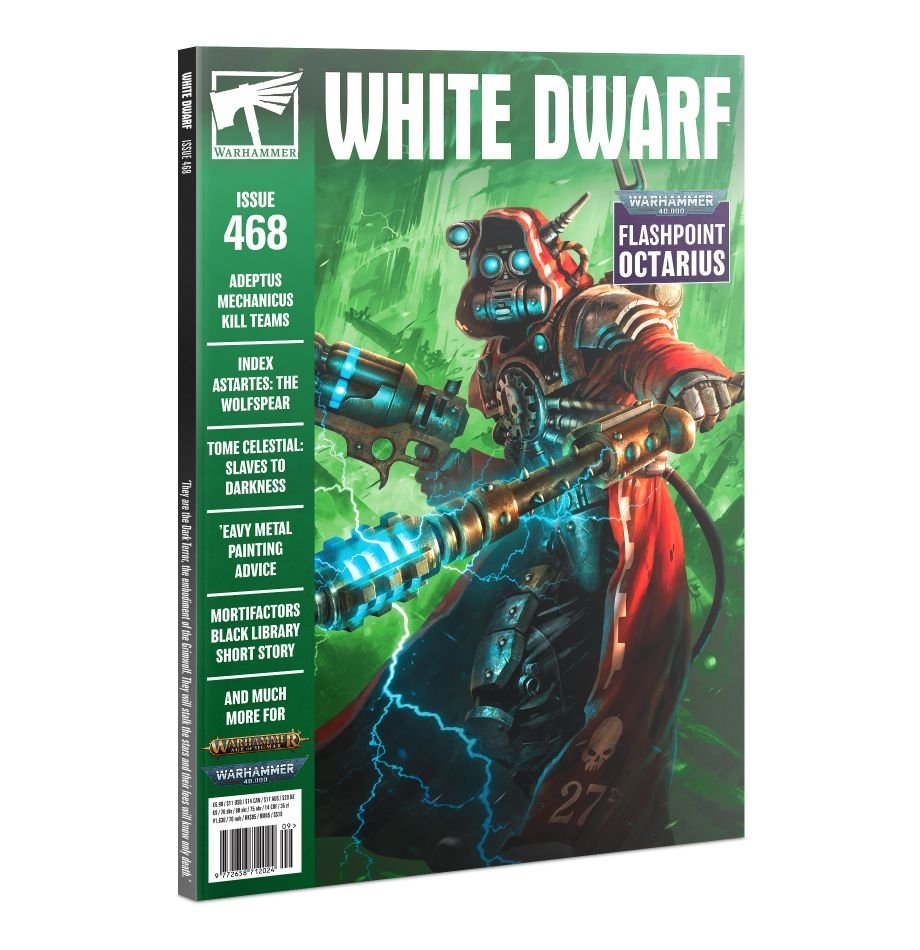 Here’s what you can look forward to in September’s issue:

Worlds of Warhammer
War correspondent Nick Horth discusses writing battlefield action and how it’s not always about blood and gore.

Index Astartes: The Wolfspear
A deep dive into the mysterious Wolfspear, one of the few known successors of the Space Wolves. Awoo! Plus, new rules, including a Chapter Tactic, three Relics, three Warlord Traits, and three Stratagems.

Gallery of Grimwolves
Three pages of stunningly painted Wolfspear miniatures, plus a guide to the Chapter’s insignia and heraldry.

Paint Splatter: Sons of the Wolfspear
Two painting guides for the young sons of Russ – one using the Contrast paints, the other using Classic techniques.

A Tale of Four Warlords
We’re at 100 Power! Joel, Jonathan, Drew, and Lydia show off their latest creations for their ever-growing armies.


WARHAMMER 40,000 FLASHPOINT OCTARIUS:
Galactic War Hosts: Hive Fleet Leviathan
Eight pages of painting and modelling inspiration for the purple-and-white xenos from beyond the stars. Includes Ork/Tyranid hybrids featuring tentacles! You have been warned.

Realmscapes: The Realm of Death
A closer look at the land of afterlives, where the dead do not rest easy. Nor the living, come to think of it…


WARHAMMER AGE OF SIGMAR FLASHPOINT CLASH:
The Tome Celestial: Slaves to Darkness
Across the Mortal Realms, the servants of the Dark Gods bring corruption and ruination to all they touch. Also includes a major update for Battletome: Slaves to Darkness in the new edition of Warhammer Age of Sigmar, including updated allegiance abilities, two bespoke core battalions, a new grand strategy, and two battle tactics.

Usurpation of Power
A mini-campaign in which we see whether Be’lakor can wrestle the Banelands from Archaon’s grasp, or if he's sent packing in this Chaos-on-Chaos conflict set in the Realm of Death.

Operation Briefing
Games developer Elliot Hamer joins us to talk about the new edition of Kill Team and some of the game’s major changes.

Eyes of the Omnissiah
All become one with the Motive Force! The Adeptus Mechanicus take on the Tyranids in this short story.

Battle Report: Awaken the Data-Spirits
The Death Korps of Krieg take on a team of Ork Kommandos in a deadly mission to reactivate a secret weapons system.

Brush Tips
Max Faleij explains how the ’Eavy Metal team develop a colour scheme for a new army. Here, he looks at the colour palette for the Kruleboyz.

Legacy of Posul
Blood is spilt and skulls taken in this short story that pits the Mortifactors against the World Eaters. Rated G for Gory!


SLEEVED ISSUE
Each physical copy of Issue 468 comes sleeved, and includes the following: